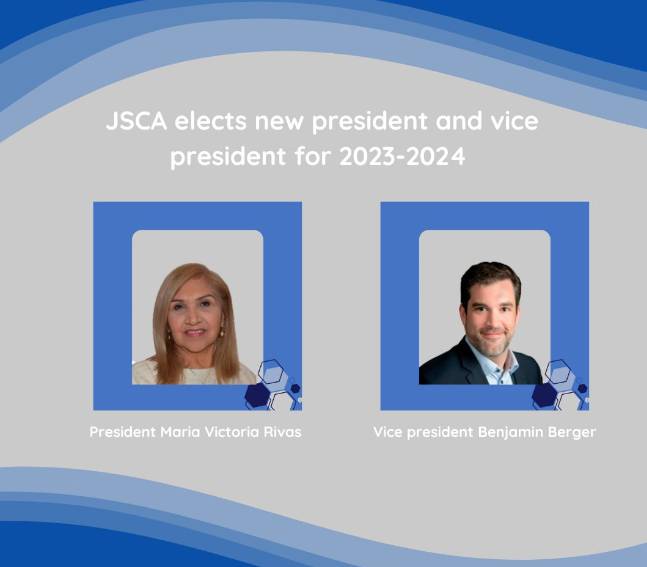 In the framework of the 50th regular session of the Justice Studies Center of the Americas (JSCA), held in Santiago de Chile, headquarters of the organization, on 15 and 16 December 2022, the Board of Directors elected Councilor Maria Victoria Rivas (Paraguay), as the new president of the international organization, and Councilor Benjamin Berger (Canada), as the new vice-president, both for the period 2023-2024.

She was an Assistant General Prosecutor in the Paraguayan public prosecution service. Dr. Rivas served as the technical advisor and coordinator of the National Judicial Reform Commission, which is part of the Paraguayan Parliament. She was also a technical advisor to National Parliament for the Criminal Procedure Reform and the Organic Law of the Public Prosecution Service. She has worked as a technical consultant for cooperation agencies such as USAID, IADB and the European Union. She won the Universidad Americana award for Leadership in Paraguay for 2010 in the “Female Leadership” category. She is a founding partner and the Executive Director of the Center for Judicial Studies of Paraguay (CEJ).

Benjamin Berger is Professor and York Research Chair in Pluralism and Public Law at Osgoode Hall Law School, York University, in Toronto, Canada. He earned his law degree from the University of Victoria and served as law clerk to the Rt. Honourable Beverley McLachlin, former Chief Justice of Canada.  He holds an LLM and JSD from Yale University, where he studied as a Fulbright Scholar. He is a member of the College of the Royal Society of Canada.

His areas of research and teaching specialization are law and religion, criminal and constitutional law and theory, and the law of evidence.  He has published broadly in these fields and his work has appeared in leading legal and interdisciplinary journals and edited collections.  He is the author of Law’s Religion: Religious Difference and the Claims of Constitutionalism (University of Toronto Press, 2015), is a general editor of the Hart Publishing series Constitutional Systems of the World, served as Editor-in-Chief of the Canadian Journal of Law and Society from 2014-2018, and is now co-Editor-in-Chief of the Journal of Law and Social Policy.

The Justice Studies Center of the Americas (JSCA) is an intergovernmental body of the Inter-American System with technical and operational autonomy, created by the OAS General Assembly in 1999, whose mission is to support the processes of reform and modernization of justice systems in the Americas.

JSCA provides technical assistance to governments, judiciaries, prosecutors’ offices and other justice institutions; prepares technical studies and generates empirical evidence; facilitates cooperation processes at the regional level; and provides specialized training to justice policymakers and operators in the countries of the Americas.

The Board of Directors is composed of seven members elected in their personal capacity by the OAS General Assembly from among the candidates proposed by the Member States. The Board of Directors is responsible for establishing the general guidelines of the Centre’s policy, supervising the management of the Executive Directorate, approving the annual work plans, the associated budget, the annual reports on its activities and the fulfilment of objectives and goals.