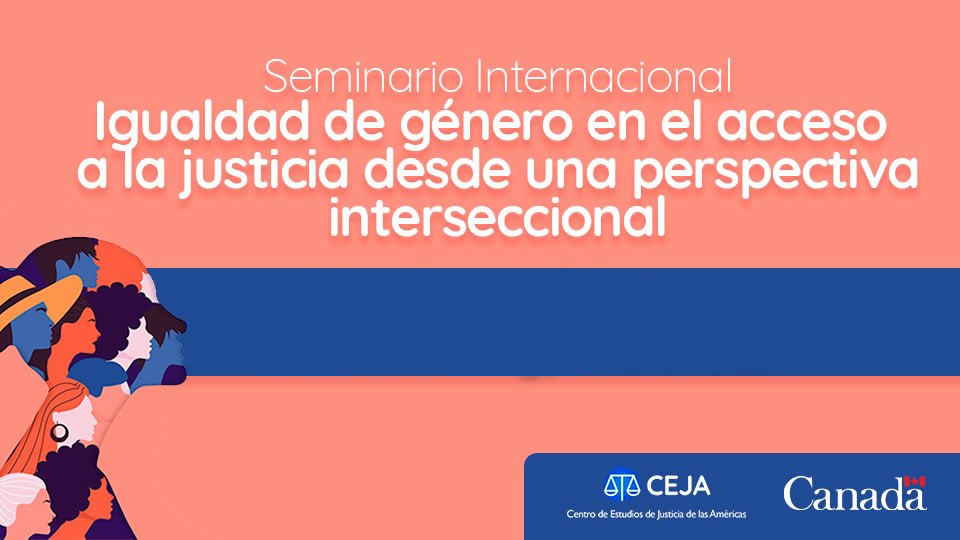 Over 110 people including representatives of government institutions, Chilean police entities (detectives, police officers and members of the country’s prison service), justice institution operators, members of inter-governmental agencies, civil society, students and academics participated in a space organized to exchange experiences and challenges related to access to justice for women from an intersectional perspective. The event was organized by the Justice Studies Center of the Americas (JSCA) in Santiago de Chile and took place on November 14, 2022. Hundreds of people also participated virtually.

The event “International Seminar: Gender equality in access to justice from a gender and intersectional perspective” was organized in the context of International Day for the Elimination of Violence against Women, which is held every November 25. Participants approached the topic from different angles, including structural challenges and progress towards achieving gender equality in access to justice in the Americas.

During her opening remarks, Jenny Murphy, President of the JSCA Board of Directors, stated that this activity is part of the implementation of JSCA’s 2022-2026 Strategic Plan, which identifies justice for vulnerable individuals and groups as a priority. 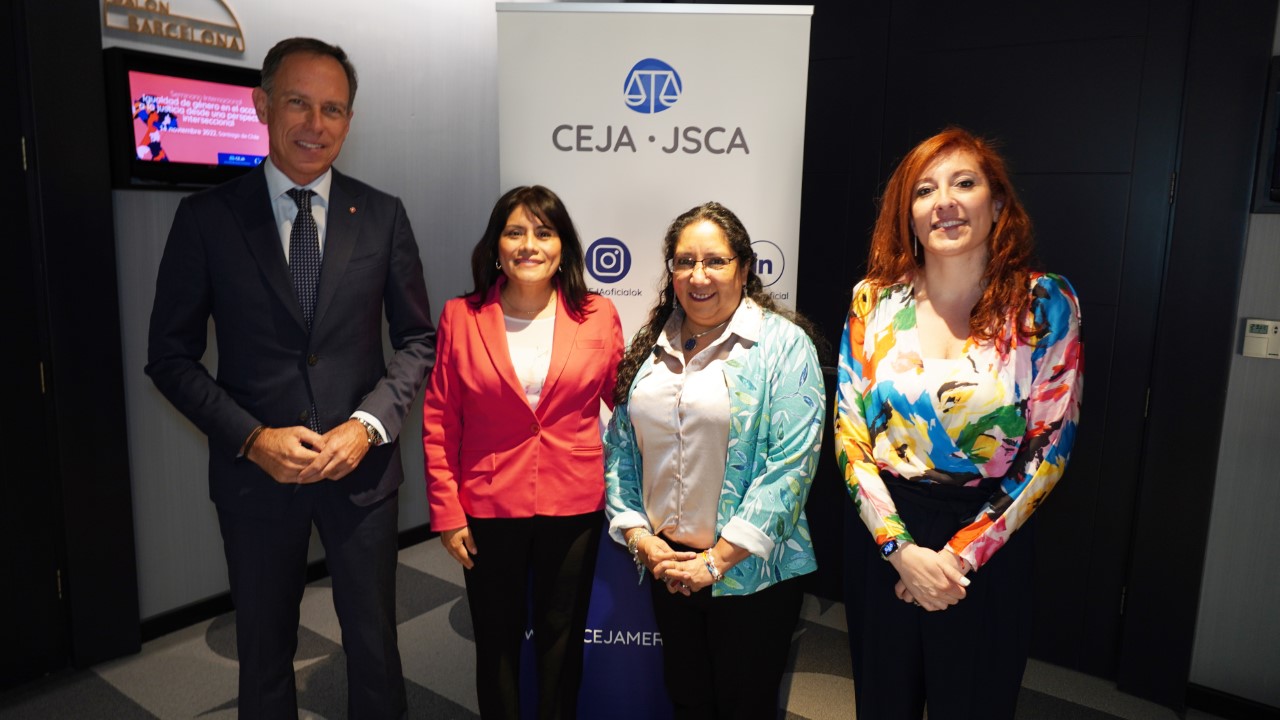 The seminar also was part of the implementation of the project “Improving Access to Justice in Latin America,” which JSCA is executing with the support of Global Affairs Canada (GAC). During the opening session of the event, Canada’s Ambassador to Chile, Michael Gort, highlighted Canada’s feminist foreign policy efforts to defend the rights of women and girls and promote gender equality. He also stated that an important aspect of this feminist approach is recognizing that women are not a homogenous group, and that indigenous, Black, racialized, LGBTQ+, migrant and refugee and disabled women, among others, face even more complex challenges. As a result, justice reforms must “guarantee that all people have the same access to justice regardless of their gender, country of origin, race, economic status, sexual identity, age, etc.”

For her part, Chile’s Undersecretary of the Ministry of Women and Gender Equity, Luz Vidal Huiriqueo, stated that the gender perspective is and should be a State policy, and that violence against women is a structural issue that must be addressed in an intersectional, intersectoral and comprehensive manner. 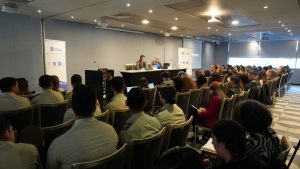 Caroline Bettinger-Lopez, Senior Advisor on Gender and Equality at the U.S. Department of Justice; Jenna Hennebry, Associate Dean and Associate Professor at University Wilfrid Laurier (Ontario, Canada); and Roxana Arroyo Vargas, Professor and Researcher at Ecuador’s Institute for National Advanced Studies (Instituto de Altos Estudios Nacionales, IAEN) at Universidad de Posgrado de Ecuador and Vice President of Fundación Justicia y Género, noted that intersectionality is an analytical tool and legal category for equality and non-discrimination that allows us to understand how various identities can influence access to rights and opportunities.

Dr. Arroyo argued that it is impossible to make progress towards gender equality in access to justice without integrating feminist epistemology into the legal training of judges, prosecutors and police agents. “The justice administration system as a whole must understand, study and apply theory on gender. This is not discretionary; it is mandatory,” she said, referencing a ruling by the Inter-American Court on Human Rights.
During the panel discussion on the right to equality and non-discrimination in access to justice, Terry Ince, Founder and Convener of the CEDAW Committee of Trinidad and Tobago, served as a moderator. She noted that despite the regulatory progress made at the international and regional levels, there continues to be a great deal of discrimination against certain groups based on their gender, race, national origin, religion, age and other factors. Ince also noted that many women face two or three different kinds of discrimination when they seek justice.

Experts are particularly concerned about detained women. Ana Selene Pineda, Coordinator of the Prison Systems and Prison Alternatives Area of the United Nations Latin American Institute for the Prevention of Crime and the Treatment of Offenders (ILANUD) shared data that reveal an increase in the number of women who are detained, noting that many are being held for crimes associated with drug trafficking. Most of these detained women are poor, young and have no job opportunities. Pineda noted that “the criminal justice system reproduces gender stereotypes, and also accentuates and exacerbates them.”

In regard to Afro-descendant and indigenous women, Michelle Mendes of UN Women shared that significant barriers have been identified in regard to access to justice. She noted that women from these groups often face various types of discrimination based on their condition as women, their racial or ethnic origin and/or the situation of poverty in which they frequently live.

In regard to persistent challenges in the area of gender inequities related to access to justice, Hilary Anderson, a Specialist from the OAS’s Inter-American Commission of Women, stated that the obstacles that remain in place are mainly impunity, which is exacerbated by stereotypes and the lesser importance given to crimes against women; the lack of territorial coverage; the limited number of resources available compared to demand; the lack of specialization in justice administration; and revictimization. Anderson also noted the absence or deficiency of systems for data gathering within the justice system, the inefficiency and overload experienced by justice systems, the lack of political will and inadequate funding. 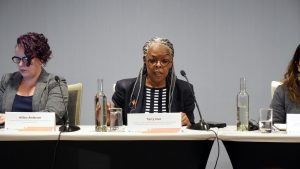 The event also included an opportunity for speakers to share experiences from across the region. First, Sara Castillo, Executive Director of Costa Rica’s National Commission for the Improvement of the Administration of Justice (Comisión Nacional para el Mejoramiento de la Administración de Justicia, CONAMAJ), presented a model for guiding, assisting and protecting migrant, cross-border and refugee women who are victims of violence in Cantón de Upala, Costa Rica. “These institutions have not committed to the model as we had hoped, but it is very important to note that civil society, Red de Mujeres Comunitarias and Casa de Derechos are sustaining the model in the strongest possible way.” She noted the importance of building alliances and allocating resources to civil society organizations.

Second, Chile’s National Public Defender, Carlos Mora Jano, presented the protocol for providing services to detained foreign-born indigenous women in Chile. As the Inter-American Court has stated, the violations of rights that occurs in prisons and the vulnerability of imprisoned people vary. As such, there is a need to implement policies that specifically address the situations of foreign-born and indigenous women. “The Public Defense Service is aware that violations of the rights of detained women, especially those of indigenous women, have occurred,” Mora stated.

Third, Colombia’s Vice Minister for the Promotion of Justice, Johana Delgado Gaitán, presented the protocol for ensuring that rural women have access to justice and land. She explained that justice institutions continue to argue that it is not necessary to demand or create specialized routes for rural women. However, statistics show that there is a need to create a different route to allow these women to exercise their rights. 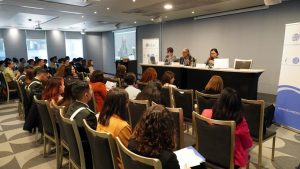 “We at JSCA strongly believe that healthy and vital democratic development like that which is needed in Latin America and the Caribbean demands more equality in access to rights for all individuals. Specifically, as the presentations we have heard at this seminar show, that access is crucial for individuals who face serious gaps in terms of equality and access to justice due to historic and structural discrimination. Those gaps were aggravated by the pandemic,” stated JSCA’s Executive Director during her remarks. “This event, which is specifically directed at discussing an intersectional approach to access to justice, we have sought to offer the opportunity to engage in an in-depth exploration of this area and especially to create awareness of and willingness to make concrete changes that benefit vulnerable individuals,” she added.

The Justice Studies Center of the Americas (JSCA) is an inter-governmental agency with technical and operational autonomy. It was established by resolution of the General Assembly of the Organization of American States (OAS) in fulfillment of the mandates set forth in the Plan of Action of the Second Americas Summit (Santiago, April 1998) and the recommendations adopted at the Meetings of Ministers of Justice or Ministers and Attorneys General of the Americas (REMJA).

JSCA provides technical assistance to governments, judiciaries, prosecution services and other justice institutions; develops technical studies and empirical evidence; facilitates the exchange of information and best practices at the regional level; and offers specialized training to public policymakers and justice operators in the countries of the Americas.