From October 17-20, 2022, the Justice Studies Center of the Americas (JSCA) was in Buenos Aires for the International Seminar “The Implementation of the Accusatory System in the Federal Criminal Justice System in Argentina,” organized in partnership with the Bureau of International Narcotics and Law Enforcement Affairs and the United States Embassy in Argentina.

As part of the visit to Buenos Aires, JSCA Executive Director Nataly Ponce Chauca, accompanied by members of the JSCA technical team, met with the Minister of Justice and Human Rights of Argentina, Martín Soria, with the General Public Defender and General Coordinator of the Inter-American Association of Public Defender’s Offices (AIDEF), Stella Maris Martínez, with representatives of the U.S. Embassy in Argentina and INL, Jesica Khun and Jérémie Swinnen, with authorities of the Magistrate’s Council of the City of Buenos Aires, with the Director of the Institute for Comparative Studies in Criminal and Social Sciences (INECIP), Aldana Romano, and with the academic director of Unidos por la Justicia, Giuliano Laudani. JSCA also signed an agreement with the Association of Federal Judges (AJUFE) of Argentina. 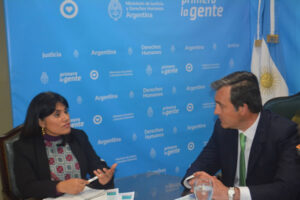 In the meeting with the Minister of Justice and Human Rights, Nataly Ponce presented the priority themes of JSCA’s Strategic Plan for 2022-2026. For his part, the minister highlighted some good practices and programs of the Ministry of Justice that are linked to the themes of the Strategic Plan, especially women and populations in situations of vulnerability, people-centered justice, human trafficking and the penitentiary system. They also discussed possible technical cooperations and training.

The meeting with the General Public Defender of Argentina and General Coordinator of the Inter-American Association of Public Defender’s Offices (AIDEF) resulted in the signing of two agreements.

The meeting with the U.S. Embassy in Argentina discussed the implementation and next steps of the project to support Argentina’s criminal procedure reform and strengthen the transition to the adversarial system, implemented by JSCA and partners under the auspices of INL. In addition, future activities were discussed, such as the study visit program for federal judges to Washington D.C., which will take place in November, among others.

The project to support Argentina’s criminal procedure reform and strengthen the transition to the adversarial system was also discussed at a meeting with INECIP, in order to define the approach that will be taken in the final stage of the project. Other possibilities for collaborative work were also discussed. 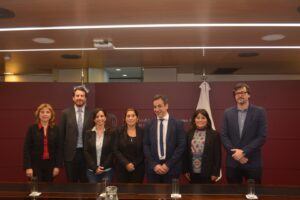 The meeting with the Council of the Magistrature of the City of Buenos Aires was attended by council members Rodolfo Ariza Clerici and María Julia Correa and members of the Executive Secretariat Raquel Munt, Jessica Malegarie and Andrés Honer, and consisted of a presentation of JSCA’s Strategic Plan, an exchange of information on the judicial system, and a discussion on the possibility of signing an agreement to work together on issues related to access to justice and judicial modernization. 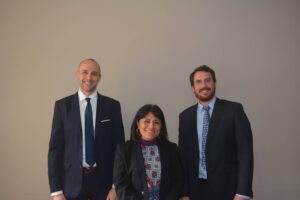 In the meeting with Unidos por la Justicia, the topics discussed included the priority issues of JSCA’s Strategic Plan and the thematic axes of UNIDOS, the renewal of the collaboration between the two institutions and possibilities for collaborative work on issues such as digital justice and the gender perspective in justice. 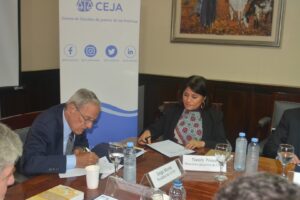 Finally, JSCA Director Nataly Ponce and AJUFE President Jorge Morán signed an agreement. The signing event was held at the Law School of the University of Buenos Aires (UBA) and had the presence of the Secretary for Legal Affairs of the OAS, Jean Michel Arrighi, and the Vice President of the Board of Directors of JSCA, Daniel Petrone. 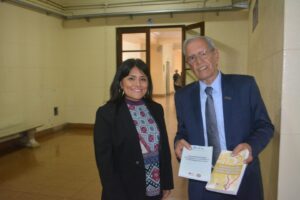 The Justice Studies Center of the Americas (JSCA) is an inter-governmental agency with technical and operational autonomy that was established by resolution of the General Assembly of the Organization of American States (OAS) in fulfillment of the mandates of the Plan of Action of the Second Americas Summit (Santiago, April 1998) and the recommendations adopted during the Meetings of Ministers of Justice or Other Ministers, Prosecutors, and Attorneys General of the Americas (REMJA).
JSCA provides technical assistance to governments, judicial branches, public prosecution services, and other justice institutions; develops technical studies and generates empirical evidence; facilitates the exchange of information and best practices at the regional level; and provides specialized training to justice sector operators and public policymakers in the countries of the Americas.