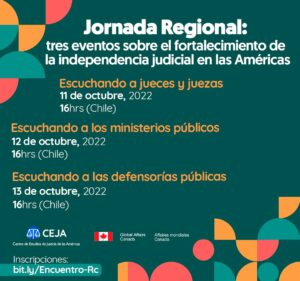 The Justice Studies Center of the Americas (JSCA), in alliance with various institutions, announces the Regional Meeting: Strengthening Judicial Independence in the Americas, to be held on October 11, 12 and 13, 2022, online, at 4 p.m. Chilean time.

In the recent process of elaboration of the JSCA’s Strategic Plan for 2022-2026, the role that justice systems in the Americas must play in the defense and consolidation of democracy in the region was identified as one of the main challenges they face. JSCA received information regarding threats to the independence of justice institutions, which manifest themselves at different levels and in different forms.

The purpose of the Regional Meeting is to establish the state of judicial independence in Latin American countries. It will seek to identify and characterize, based on listening to the voices of the people who operate the justice systems, the explicit or implicit obstacles they face, in order to strengthen the mechanisms to safeguard judicial independence as an essential pillar of democracy.

On October 12, the panel “Listening to Public Prosecutors” (Download program),  in partnership with the Ibero-American Association of Public Prosecutors, will be held, with the participation of four high-level panelists, prosecutors or former prosecutors from various countries, who will share their impressions on the subject and how in their daily actions the importance of the autonomy and independence of the Public Prosecutor’s Office materialize.

JSCA invites judges, public prosecutors, public defenders, litigants, administrative personnel of justice institutions, managers of public policies related to justice and the strengthening of democracy, academics and the legal community in general to participate in this event. Registration here.

The Justice Studies Center of the Americas (JSCA) is an inter-governmental agency with technical and operational autonomy that was established by resolution of the General Assembly of the Organization of American States (OAS) in fulfillment of the mandates of the Plan of Action of the Second Americas Summit (Santiago, April 1998) and the recommendations adopted during the Meetings of Ministers of Justice or Other Ministers, Prosecutors, and Attorneys General of the Americas (REMJA).

JSCA provides technical assistance to governments, judicial branches, public prosecution services, and other justice institutions; develops technical studies and generates empirical evidence; facilitates the exchange of information and best practices at the regional level; and provides specialized training to justice sector operators and public policymakers in the countries of the Americas.