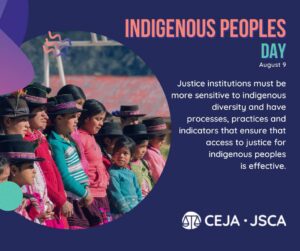 On the occasion of the International Day of the World’s Indigenous Peoples, celebrated on August 9, the Justice Studies Center of the Americas (JSCA) calls for the effective access to justice for indigenous peoples.

Justice institutions are in need of being more sensitive to indigenous diversity, and of having processes, practices and indicators that guarantee that indigenous peoples’ access to justice is effective.

JSCA also stresses the need for justice systems to incorporate an intersectionality perspective, that makes visible and reduces the structural processes of discrimination and exclusion of indigenous peoples that affect women in a differentiated and unequal way. This issue was addressed in the recent seminar on indigenous peoples and access to justice organized by JSCA.

The Justice Studies Center of the Americas (JSCA) is an inter-governmental agency with technical and operational autonomy that was established by resolution of the General Assembly of the Organization of American States (OAS) in fulfillment of the mandates of the Plan of Action of the Second Americas Summit (Santiago, April 1998) and the recommendations adopted during the Meetings of Ministers of Justice or Other Ministers , Prosecutors, and Attorneys General of the Americas (REMJA).

JSCA provides technical assistance to governments, judicial branches, public prosecution services, and other justice institutions; develops technical studies and generates empirical evidence; facilitates the exchange of information and best practices at the regional level; and provides specialized training to justice sector operators and public policymakers in the countries of the Americas.