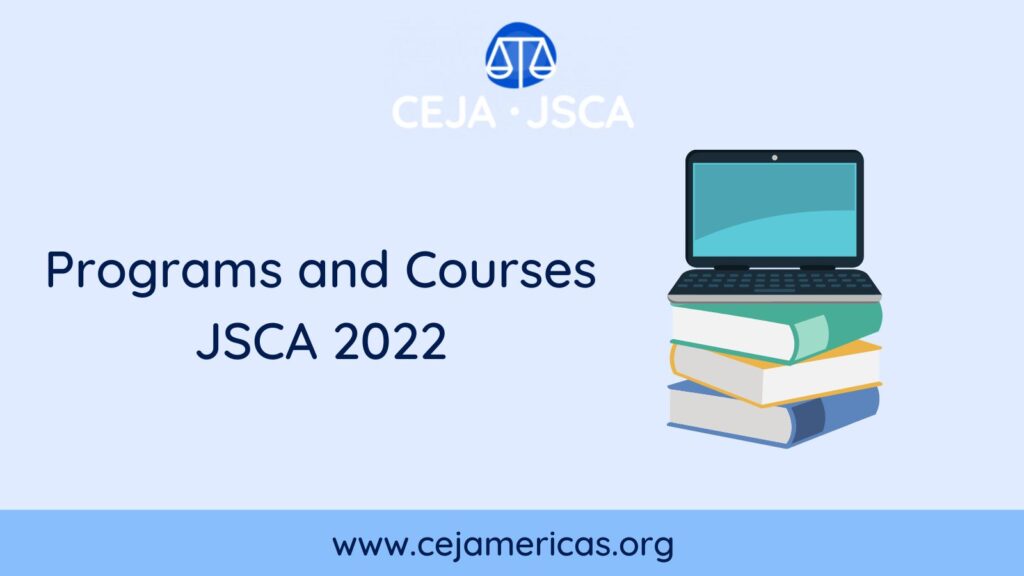 The Justice Studies Center of the Americas (JSCA) presents its schedule of training programs and courses for the second half of 2022.

The main purpose of these programs and courses is to give the legal community and the general public access to high-quality, innovative, ground-breaking content on justice in the region that they can use without traveling. We can adjust the schedules, module analysis, assessments and extra activities included in each course based on the participants’ availability.

Please email us at info@cejamericas.org with any questions.

Program on Gender and Justice

This program offers a comprehensive overview of a series of key conceptual aspects of the application of the gender perspective in justice systems. It also explores the practical skills necessary to apply the gender perspective when receiving reports and conducting prosecutorial and police investigations of cases of gender-based violence.

The program is comprised of two virtual courses. Students may complete either or both of them.

Description and content: The situation of women in Latin America and the broad theoretical development that the gender perspective has undergone over the past decade reveal the need to incorporate them into daily justice-related practices.

This course covers key concepts related to the incorporation of the gender approach in the field of justice. The goal is for each student to acquire basic skills that they can use to apply the gender perspective in judicial proceedings.

The course consists of four modules:

Effort: Each module takes approximately 12 hours to complete, including time spent in the virtual classroom and fora and on readings.

Practical course on receiving reports and conducting prosecutorial and police investigation of cases of gender-based violence.

Description and content: This course was developed in the context of the project  “Combating impunity by strengthening sequences of measures in criminal prosecution,” which JSCA conducted in collaboration with the German cooperation agency Deutsche Gesellschaft für Internationale Zusammenarbeit (GIZ).

The course is financed and promoted by the German Federal Ministry of Foreign Relations. It offers tools for strengthening criminal prosecution of gender-related crimes that occur within intimate relationships (such as domestic violence) in response to the increase of this phenomenon in the region during the public health crisis. The target audience of this course is police and public prosecutor’s office officials from Latin America. Its goal is to apply best practices identified in Latin American countries in order to improve criminal prosecution, particularly that of cases of gender-based violence.

The course consists of six modules:

Effort: Each module takes approximately 8 hours to complete, including time spent in the virtual classroom and fora and on readings.

The following discounts will be offered to entities with multiple students enrolled in both courses:

Please email us at info@cejamericas.org for information about corporate discounts.

The goal of this course is to expand the study of civil justice reform from a legal and public policy perspective using a critical and proactive vision of the technical and management challenges posed by the judicial reform processes that various countries in the region are currently implementing.

Latin America is gradually changing its civil justice systems. Several countries have followed this path since 1989, when Uruguay’s General Procedure Code was implemented and based on the influence of the Model Civil Procedure Code for Ibero-America. Their goal is to transform traditional civil justice systems, changing various aspects of them. Technical consensuses are being developed around how to leave the traditional logic of the written file behind and move towards a system of oral hearings in which the judge evaluates the evidence based on their experience of it.

JSCA has organized the issues and discussions taking place across the region in regard to what these new reformed civil proceedings should look like and how to adjust judicial institutions’ objectives to align with citizens’ new demands given that justice reforms should look to solve disputes quickly and generate effective access to justice for high percentages of the population.

The Inter-American Program on Civil Justice is organized into three phases: (1) The first phase, which is virtual, addresses the conceptual nodes for building a civil reform model; (2) The second, also virtual, offers tools and techniques for oral litigation and hearing management in oral civil proceedings; and (3) The third, which is offered in-person, offers participants an opportunity to learn about the operation of Chile’s justice system. (See the Research Visit Program: Innovative practices for modernizing justice in Chile.)

This course covers concepts related to the construction of a civil justice reform process from the public policy sphere and in regard to the operation of civil justice.

The course is comprised of seven asynchronous virtual modules:

This practical course provides techniques for litigating attorneys and judges in order to allow them to participate in oral civil proceedings.

It is comprised of seven synchronous virtual modules:

Basic course and Litigation course: US$ 600

Basic course, Litigation course and Research Visit Program: Innovative practices for modernizing justice in Chile: US$ 1,000 if the three courses are taken together.

The purpose of the program is to present the progress made and innovations developed in the operation of Chile’s justice system institutions. The areas of family, labor and criminal justice have undergone important reforms focused on implementing oral proceedings. The professionalization of the management of justice in Chile is a focus area. We highlight innovative practices including the creation of specialized support units for justice operators, the use of technology, process-based management and other methodologies aimed at providing timely, effective and efficient justice services.

The program is comprised of four modules:

Module 1. Visit to the Judiciary:

US$ 600 Includes all work sessions, visits and ground transportation (by bus) to the facilities of each entity with return service to the hotel. Activities will take place between 9 a.m. and 5 p.m. except for Monday, when activities will begin at 11 a.m., and Friday, when they will end at 2 p.m.

Each participant must cover the costs of their travel, lodging and meals and must comply with public health protocols in place for entering, staying in and departing Chile.